It was the Indian’s way to pass through a country without disturbing anything; to pass and leave no trace, like fish through water, or birds through the air.

The people of the mesa Acoma lived on the barren top to get away from their enemies. One thing that struck the Bishop was that every mesa  was duplicated by a cloud mesa, like a reflection, which lay motionless above it.

Two French priests, lifelong friends, come to the wild American Southwest as missionaries. The territory had endured three centuries of moral and spiritual abandonment by natives and churchmen alike. Sent by the church to bring order and faith to an untamed land, their greatest assets were their differing personalities — Bishop Jean Latour with patrician and thoughtful dignity, and Father Joseph Vaillant, a dynamic and friendly man of the people. They fuse these blessings to battle the forces of darkness in the form of rogue priests who become wealthy on the backs of the native people. In order to clean this house and bring order and spiritual discipline, the two friends must sweep away the distrust of those who have been enslaved and abused.

“But the priest had charged him twenty pesos and that was half of all he had saved to buy furniture and glass windows for his house.”

The two churchmen cover thousands of miles of desert and

mountains, through storms, and lawless people, on horseback, afoot, or by wagon, carrying the vessels and accoutrements of their faith for baptisms and marriages as well as their personal equipment and supplies. Often they traveled separately to cover more territory. They faced hardships, wagons and axles breaking down when on long journeys with heavy loads.

At one point, Father Joseph is summoned to the home of a wealthy but friendly rancher, Manuel Lujon, to perform marriage and baptism rites for his people and workers. Couples and children abound outside the blessings of marriage because no honest priests are within their territory. As soon as Father Joseph dismounted from his long journey, he was offered refreshment by his host. However, the good Father was all business.

“But where are those to be married?” he asks.

“The men are all in the field, Padre,” Manuel answers. “There is no hurry.”

But the Padre is late because of problems with his horse. “Send out to the fields for your men, Senor Lujon, A man can stop work to be married.”

“But one moment, Padre. There are all the children to baptize. Why not begin with them.”

“No, I tell you, Lujon, the marriage first, the baptisms afterward; that order is but Christian. I will baptize the children tomorrow morning, and their parents will at least have been married overnight.”

The rough terrain and weather often caught the two friends far short of their destination. But they were to find it wasn’t only killer weather they had to fear. As they were headed to Mora, a village overflowing with refugees from an Indian attack in the Conejos Valley where many of their number were killed, winter weather struck with cold, driving rain. And . . .

Before the travelers had crossed the mountain meadows, the rain turned to sleet, Their wet buckskins quickly froze, and the rattle of icy flakes struck them and bounded off. The prospect of a night in the open was not cheering. Before the hour was done they came upon a wretched adobe house, so poor and mean . . . on the edge of a steep ravine. The man who came out was not Mexican, but an American. During the few words they exchanged with him, Father Latour felt a growing reluctance to remain even a few hours under the roof of this evil looking man. When the man snarled at his wife, a Mexican woman, to help him with the horses, she stopped momentarily in the doorway with a look of horror and drew her finger across her throat. Father Joseph was the first to find his tongue. “Your pistol is loaded, Jean?”

When the American would not let them into the barn to get their horses, the Bishop drew his pistol. Soon they were on their way again. The American was the real life mass murderer, Buck Scales. When the priests reported him, a search party went after him. When the bodies of his victims were found at the back of the hut, Buck Scales was hanged and his wife, Magdalena, was freed.

The author of Death Comes for the Archbishop, Willa Cather, calls her work a narrative rather than a novel, because it is filled with anecdotes in no particular order rather than a plot with a beginning, a middle, and and end. But this classic is her finest work, told with an economy of words and a lot of heart. Her two main characters are based on real life priests, Jean Baptiste Lamy, and Joseph Machebeuf.

Through her very real characters, we see the American Southwest in all its beauty and savagery. We journey with them as they bring order through love and respect for its many different  cultures, and for the unimaginable grandeur of the land itself.

In the snapshots of the difference in people, Father Joseph is in Denver trying to raise money to finish the church there. But his words fall on deaf ears among this congregation.

When he left Denver, Father Joseph told his congregation there that he he was going to the Mexicans to beg for money. The church in Denver was under a roof, but the windows had been boarded up for months because nobody would buy glass for them. In his Denver congregation there were men who owned mines and sawmills and flourishing businesses, but they needed all their money to push these enterprises. Down among the Mexicans, who owned nothing but a mud house and burro, he could always raise money. If they had anything at all, they gave.

After many years, Archbishop Latour was confronted with a vision of building a cathedral, something with clean lines, but a part of the beauty of the land. He found his cathedral 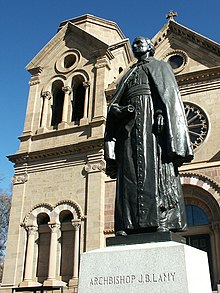 in a  golden hill, and took his friend out to share his dream.

The hill stood high up and quite alone, boldly facing the declining sun and blue Sandias. Father Vaillant noticed that on the exposed Western face, a rugged wall of rock . . . was yellow, a strong golden ochre, very much like the sunlight that was now beating upon it.

“I have ridden over these hills in every direction, but this is the only one of its kind,” remarked the Bishop. After a moment of silence he looked up at the rugged wall, gleaming gold above them.

“That hill, Blanchet, is my Cathedral.”

And so it became in reality. Bishop Jean Lamy, Latour’s namesake, built his cathedral out of the golden hill, and there it stands today, a testimony to the God of miracles and his servants who never gave up.

The Santa Fe Cathedral at sunset