By 1861, Ft. Pickens was a sad sentinel guarding Pensacola Harbor, and Santa Rosa Island on which it stands, just across from the mainland. Abandoned, battered, and dilapidated, this large brick fort was manned only by the ghosts of soldiers past.

The largest of a four-fort group — Ft. Barrancas, Ft. McRee, and the Navy Yard — Ft. Pickens (completed in 1834) was once the linchpin to bolster the Pensacola mainland and coastal defenses. But by the time swords rattled in the pre-dawn light of the Civil War, time and history had passed it by and Lt. Adam J. Slemmer was in charge of the United States forces at Ft. Barrancas.

Near midnight of January 8, 1861, — almost three months before the opening salvos upon Ft. Sumpter, a group of local men attacked Ft. Barrancas, hoping to take and hold it for the impending war and the Confederacy. The attack was repelled by the U.S. soldiers guarding the fort.

Two days later when Florida seceded from the Union on January 10, Lt. Slemmer — determined that his position was indefensible — blew up over 20,000 pounds of gunpowder at Ft. McRee and spiked the guns at Ft. Barrancas. In spite of the deplorable condition of Ft. Pickens, Lt. Slemmer felt it was the most defensible. Abandoning Ft. Barrancas, Slemmer fortified Ft. Pickens with 51 soldiers and 30 sailors.

Five days later, on January 15, Lt. Slemmer and his 81 men refused terms of surrender to the Florida militia under Col. William Henry Chase, the very engineer consigned to the construction of Ft. Pickens while a captain in the U.S. Corps of Engineers. The terms of surrender were offered and again refused three days later, January 18. Ft. Pickens was held against threat of attack by this handful of men until reinforcements arrived in April, when actual war was declared, and Lt. Slemmer was relieved by Col. Harvey Brown.

The stalemate continued without either side getting the upper hand for several months. Cannon duels raged to little effect, even though both sides brought in new batteries and fresh forces. Through it all Ft. Pickens was outnumbered over two to one — about 7000 Confederates to 2000 Union.

In one raid, Union forces burned a Southern ship. Then in early fall, over 1,000 Confederates under the command of General Richard Anderson, were landed on Santa Rosa Island in a deadly nighttime raid. The camp of the  6th New York Volunteer Infantry commanded by Col. William Wilson, not far from the walls of Ft. Pickens, was overrun and routed. 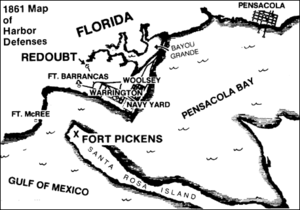 Anderson dug in, tempting the Union forces inside Ft. Pickens — garrisoned by parts of the 1st, 2nd, and 5th U. S. artillery and the 3rd U.S. Infantry — to come out and fight. But Anderson didn’t count on Union reinforcements getting to Ft. Pickens. Bolstered by the extra men, Col. Harvey Brown sallied forth to answer the challenge. The Confederates jumped back in their boats and retreated to the mainland.

Ft. Pickens, in spite of bombardment and threats of attack, was one of the few Southern forts to remain in Union hands throughout the Civil War. (Wikipedia).

Deactivated in 1947, Ft. Pickens is now administered by the U.S. National Park Service and is listed in the U.S. National Register of Historic Places. It rests upon 850 acres on Santa Rosa Island. For more information see http://www.nps.gov/guis/planyourvisit/fort-pickens.htm

NOTE: During the Indian Wars, Geronimo, the Apache medicine man and war leader, was held prisoner here from 1886 – 1887, sadly becoming more of a tourist attraction for Pensacola.